My day of photography tuition

When my son was born we bought a Nikon SLR camera to try to keep up to speed with our children.  It’s been on autofocus since we bought it, brought out on occasions when we feel we should have a photo. The first shot is of me on the operating table, about to have a c-section.  There’s about 700 more shots, all of them lovely memories, but none of them particularly stunning photographs.
Hopefully that is set to change.  Back in May my dad bought me a day’s photography tuition with Jon Cruttenden for my birthday. Dad, who takes great photos himself, stumbled upon Jon and his stunning photographs at the local market.

I finally redeemed my voucher this week.  The morning was spent gently filling my brain with theory and familiarising myself with the creative zone of my camera, the world beyond autofocus. Jon is a really patient tutor and had some great analogies to explain the technical bits.  He also provided me with an excellent set of notes to refer to afterwards.

After lunch Jon, a herd of cows, and I spent a sunny afternoon photographing White Nancy.  This strange bottle shaped summer house was built to commemorate victory at the Battle of Waterloo. I can’t tell you how lovely it is to spend time on a proper hill (how I miss Cheshire) in the realms of my youth (I could see a handful of old school friends houses from this vantage point) without kids (I’m tired/hungry/bored) and armed with a camera (creative me time).

I had no idea how many decisions go into taking one shot.  As we climbed up the steep hill and I focussed on not losing my flip flops or landing in a cow pat, Jon was already narrating me through his thought processes as a photographer.  Would you like to be let in on some of mine? 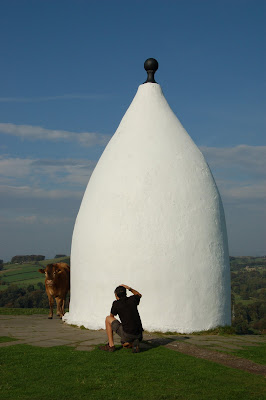 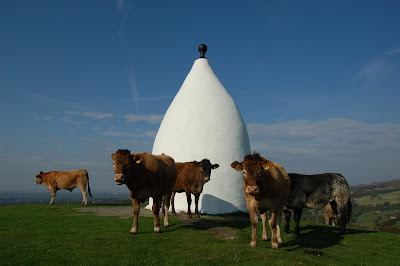 Jon pointed out that there’s a kind of moody rock band look about a herd of cows which I came close to capturing here.  Would they co-operate and all look at the camera though?  I’m most annoyed with that grey one looking at the other one’s bottom. 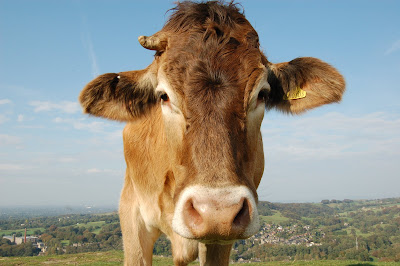 Turns out individual cows are easier subjects to practice on, they don’t giggle, run off or blink. 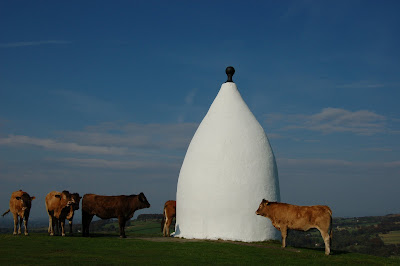 I just love the way they stare at each other.  If White Nancy was just a bit more to the right, and the half a cow behind it pushed off.  Of course what I really wanted was a comedy shot with one cow’s bottom and another’s head poking out, but would they cooperate? 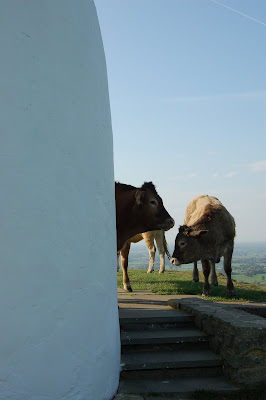 I got the head poking out, now would the other two push off?  I was starting to feel like they were talking about me now. 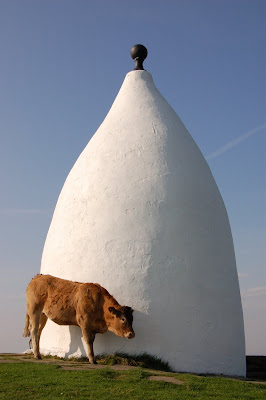 I like the cow curving round White Nancy.   The light is almost Mediterranean, and this is the 3rd of October.  But… the ahem ‘white balance’ isn’t right, White Nancy is a bit pink. 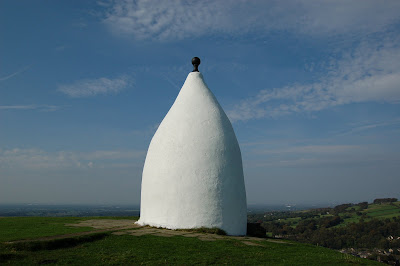 ‘Yeah I know the rule of thirds’, she said, ‘I used to teach film’.  So why did I keep shoving White Nancy bang in the middle?  It would look so much better a third of the way over. 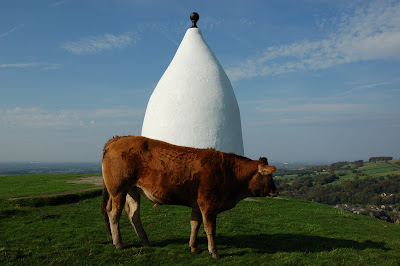 But, someone wasn’t letting me retake that shot.  But do you notice how the shadow, on the right of White Nancy, emphasises its curve?

As a media teacher, I’m still more comfortable de constructing shots than constructing them.  There is an incredible amount you can ponder in every shot and I’m still juggling all that theory with controlling the camera itself and reacting to my surroundings.  But I can’t recommend doing this enough.  I’m really excited about photography, the day totally changed the way I see it.

It’s no longer just a case of dutifully documenting our lives.  I want to make time to create some great photographs.  Photographing something other than my children was very liberating, but still gave me plenty of ideas to practice on them. Although I kind of like the idea of hanging out on hillsides with cows.

Jon covers Staffordshire, Cheshire and Derbyshire and offers tuition as well as photography. Spending a day with someone who is passionate about their art, able to explain it and willing to let others into their artistic processes is a rare and inspiring treat.

3 Steps to Becoming a Landlord

How to Create a Safe Office Space: A helpful guide for a busy boss

© All content on these pages is the intellectual property of the author, unless otherwise stated, and may not be used or reproduced under any circumstances without permission. Thank you © A Creative Residence 2010-17